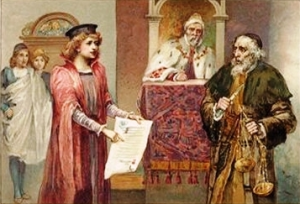 Shakespeare’s The Merchant of Venice has a speech about mercy, the central theme of our miserere, Psalm 51. It is delivered by Portia in Act 4 Scene 1 in a courtroom context. Portia is pleading, even begging, for Shylock’s mercy. It provides a rich meditation on the meaning of mercy and its relationship with justice. Such reflection is important in earthly affairs, but as is made clear in the speech it pertains closely to the mercy with which Psalm 51 is concerned—that is the unfathomable quality of mercy shown by the Creator to his creatures:

The quality of mercy is not strained;
It droppeth as the gentle rain from heaven
Upon the place beneath. It is twice blest;
It blesseth him that gives and him that takes:
‘T is mightiest in the mightiest; it becomes
The throned monarch better than his crown:
His sceptre shows the force of temporal power,
The attribute to awe and majesty,
Wherein doth sit the dread and fear of kings;
But mercy is above this sceptred sway;
It is enthronèd in the hearts of kings,
It is an attribute to God himself;
And earthly power doth then show likest God’s
When mercy seasons justice. Therefore, Jew,
Though justice be thy plea, consider this,
That, in the course of justice, none of us
Should see salvation: we do pray for mercy;
And that same prayer doth teach us all to render
The deeds of mercy. I have spoke thus much
To mitigate the justice of thy plea;
Which if thou follow, this strict court of Venice
Must needs give sentence ‘gainst the merchant there.
William Shakespeare, The Merchant of Venice, Act IV, Scene I